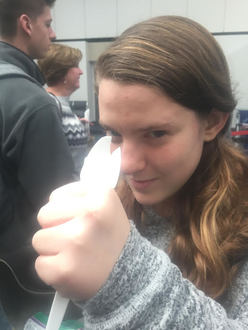 College: Branford
Class: 2021
Hometown: Bronx, NY
Voice Part:​ Alto
​It’s said that when Shalhevet Schwartz was born, instead of crying, she immediately began singing the first bars of Shir Ga’aguim, and completely nailed the rhythm — a feat that had never been attained by any tenor or alto prior, and may never be reached again. Ever since, Shalhevet has been stunning audiences with her angelic voice and unheard of grasp of music theory. We can only hope that she uses these powers for good. When Shalhevet isn’t dropping sick beats in Yale’s best, and only, Jewish a cappella group, she also sings with Yale’s Slavic Chorus. As a result, it’s unclear whether Shalhevet has the capability to sing in English.

Shalhevet comes to Yale after two consecutive gap years in Israel and decided that, in order to make up for the two years of suffering she had missed, she would compact it all into one year by taking Directed Studies. To this day, Shalhevet has never been sighted without coffee in a green cup. One has to wonder — is it the same cup? Just another mystery about Shalhevet that may never be resolved.

Shalhevet can frequently be found eating Slifka Center while simultaneously debating the true meaning of Plato’s Allegory of the Cave. Her name means flame, and she certainly is a fiery one. If you ever see anyone getting heated over Herodotus, go over and introduce yourself to Shalhevet Schwartz.
Powered by