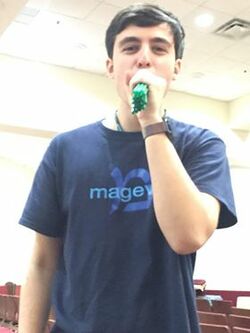 In his spare time not spent pondering maximization, Josh sings in an unknown number of other singing groups, ranging from the mainstream (Magevet, obviously) to the obscure (Gl...Gelee?...Glee? Is that how you spell it?). To keep up with the pressure of having rehearsal every day of the week, Josh has taken to subsisting solely on the the snow-cones he makes in his room, much to the indignation and perpetual concern of the 17 Jewish mothers he spontaneously obtained on Tap Night (“You have to eat vegetables, Josh!”).

Josh is an authentic All-Connecticut Boy, which means he’s pretty familiar with the area, but in order to strengthen his geographic knowledge, Josh planned to purposely get himself addicted to Pokémon Go when he got to Yale so he’d be staring at a map a lot. The plan seems to have been successful so far.

No one knows when or if Josh does work for his classes between all of these various hobbies and addictions. But, you know, it’s not like any of that stuff matters. Or at least, as he puts it, “that’s what I learned from Anime.”
Powered by