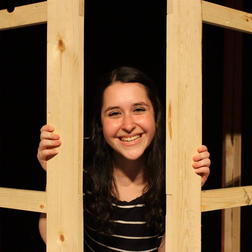 ​College: Branford
Class: 2019
Hometown: Rye Brook, NY
Voice Part: ​Soprano
It was the worst of times but now is the best of times. Ali Futter recently transferred from the University of Chicago to Yale this year, journeying from the Midwest to the the East Coast. One could say she spent college in the Middle East. A theater aficionado hailing from the Jewish Homeland of Eretz Scarsdale, NY, she grew up traveling to The City and viewing every Broadway hit of the last 20 years — while they were still novel and new, of course. From this upbringing she developed her powerful and entrancing Theater Voice™️, which keeps Magoovs sane and entertained on the long tour car rides. According to legend, she used this same voice to conquer a Moth Story Slam that her mysterious twin sister dragged her to.

But with the great power of the Theater Voice™️ comes a great responsibility., If you begin to sing a Broadway song within a three mile range of Ali Futter, she will dutifully emerge and join you in perfect three part harmony — four part if you are singing from the Lion King franchise.

Prince Ali, Ali Ababwa is also a world class traveler, and her extensive knowledge has revealed to her the beauty of Midway Airport in Chicago, IL, a sentiment unfortunately shared by no one. Ali loves being on the move so much, in fact, that she has twice agreed to write an essay on a treadmill. When not reading hundreds of pages of English literature, Ali regularly frequents all three bookstores in the campus area. She once sent her fellow Magoovs on a Top Secret Mission™ to buy a different book from each store. To this day, we don’t know why. Her literary mastery renders each text or email she sends a many-layered masterpiece in competition with Paradise Lost. If you see, or more likely hear, someone fitting these descriptors, there’s a 50% chance it’s Ali…… but also a 50% chance it’s her twin.
​
Powered by